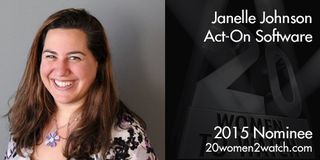 As Director of Demand Generation, Janelle has played a critical part in continuing the company’s rapid growth – rising to meet ever-increasing lead and revenue goals and ultimately driving millions in pipeline contributions quarterly. Janelle is an ‘A player’ who is consistently on top of her game, executing highly successful multi-channel campaigns that generate thousands of new leads a month and drive impactful revenue for Act-On’s bottom line via dynamic, highly actionable, and results-oriented marketing campaigns.

Janelle has the aptitude of both a scientist and a marketer, knowing how to leverage big data to test, refine and optimize ongoing marketing campaigns. She is the epitome of a modern marketer, using the latest marketing technologies to build sophisticated automated programs, generate, qualify and nurture more leads, and ultimately prove marketing’s value to the bottom-line.