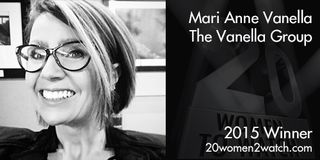 Mari Anne Vanella is a long-standing thought leader and innovator in sales and sales lead management for over 15 years. She has combined her experience of executive management in tech companies into founding and leading her own company ,The Vanella Group, Inc., into a highly sought-after firm that brings an effective approach for B2B sales teams to engage and align with buyer behavior and buy-cycles. Under her leadership, The Vanella Group, Inc. has formed partnerships with companies such as Marketo, Salesforce.com, InsideSales.com, InsideView, and many others. Her firm has grown in size and revenue every year for the last 14 years and is considered one of the top providers in the space of lead generation for enterprise technology companies.

Her firm has worked with global technology companies such as SAP, Hitachi, Hughes, and many others. The formula she developed continually proves year after year to be the source of the highest number of actual opportunities. One source reported that upon review, 80% of their large deals closed over a reporting term were a direct result of The Vanella Group, Inc. programs they run. She recently launched a consulting arm that enables sales teams to successfully manage today's remote customer relationships that require a completely different approach to engagement and communication.

More recently she has spoken much on the topic of Social Selling and helping companies to modernize their sales best-practices to incorporate real-time research techniques to better understand their customers. She was featured recently at LinkedInLive, where she spoke on the topic of how companies can better leverage the power of LinkedIn for revenue growth.

Winner's Achievements in the field of Sales Lead Management:

She acts in an advisory capacity to Squirro, a visual BI firm working with large organizations all over the world

Her industry affiliations include:

Mari Anne also mentors young entrepreneurs and helps support organizations that support business enablement through organizations like Kiva. She also does volunteer work to help the local community. Organizations she supports include: